From the result gathered,

Gross Earnings grew by 41.70% y/y to N246.58 billion ( with interest income and non-interest income contributing 66% and 34% respectively) , so was Operating Expenses with 38.29% y/y surge which was driven by the high inflationary environment and the effect of unamortized AMCON charges

Earnings per share (EPS) also grew to N1.38 in the period, compared with N1.17 recorded in the previous year. The directors also proposed an interim dividend of N0.25 per share, set for a closure date of 7th September, 2017 and a payment date set for 21st September, 2017.

Commenting on the financial results, the Group Director/CEO, Herbert Wigwe Mr. Segun said that “The Group’s performance in the first half of the year reflects the strength and sustainability of our business, and the effective execution of our strategy. We continue to, however, intensify the implementation of our cost reduction initiatives in order to improve the bottom-line, despite high inflationary environment.
In view of the recovering macro, our focus remains growing the retail franchise through digital expansion to enable diversified earnings as well as continuous and proactive risk management as we selectively grow risk assets. We will remain resilient in the execution of our bold strategy for increased growth and profitability whilst maximizing shareholder value in 2017and beyond.”

Finally, we believe ACCESS is poised to outperform in 2017FY. Based on yesterday’s close price of N10.24 and TP price of N11.80, we have a BUY recommendation on the stock. 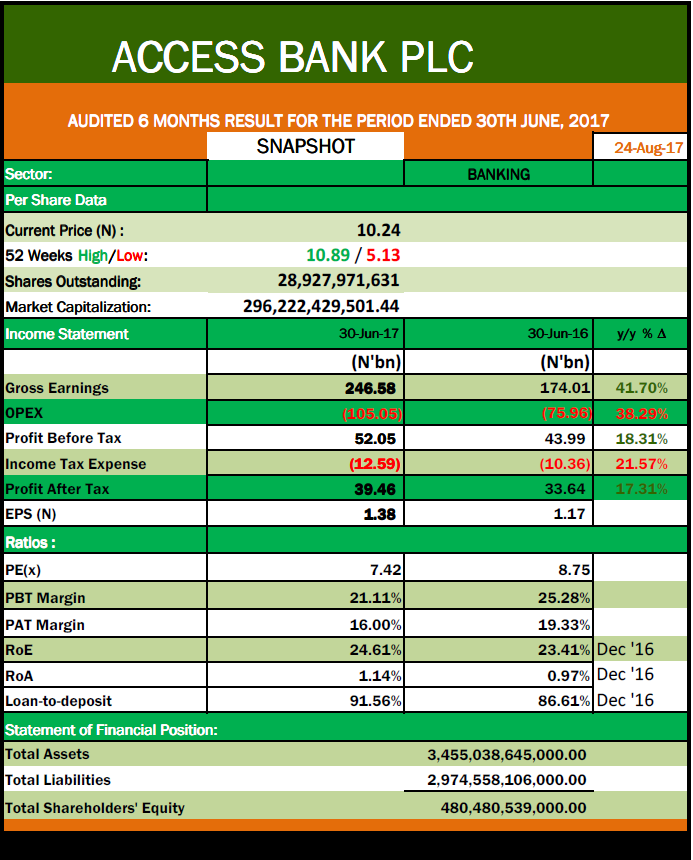 We use cookies on our website to give you the most relevant experience by remembering your preferences and repeat visits. By clicking “Accept All”, you consent to the use of all the cookies. However, you may visit our "Our Privacy Policy" to enable you learn about how we endeavour to keep digital content safe and secured.
Cookie SettingsAccept All
Manage consent

This website uses cookies to improve your experience while you navigate through the website. Out of these, the cookies that are categorized as necessary are stored on your browser as they are essential for the working of basic functionalities of the website. We also use third-party cookies that help us analyze and understand how you use this website. These cookies will be stored in your browser only with your consent. You also have the option to opt-out of these cookies. But opting out of some of these cookies may affect your browsing experience.
Necessary Always Enabled
Necessary cookies are absolutely essential for the website to function properly. These cookies ensure basic functionalities and security features of the website, anonymously.
Functional
Functional cookies help to perform certain functionalities like sharing the content of the website on social media platforms, collect feedbacks, and other third-party features.
Performance
Performance cookies are used to understand and analyze the key performance indexes of the website which helps in delivering a better user experience for the visitors.
Analytics
Analytical cookies are used to understand how visitors interact with the website. These cookies help provide information on metrics the number of visitors, bounce rate, traffic source, etc.
Advertisement
Advertisement cookies are used to provide visitors with relevant ads and marketing campaigns. These cookies track visitors across websites and collect information to provide customized ads.
Others
Other uncategorized cookies are those that are being analyzed and have not been classified into a category as yet.
SAVE & ACCEPT
Posting....
fake richard mille
There are not many functions of richard mille replica, except for the basic time display, there is only a very powerful tourbillon function. Its time display function has only two hands, hour and minute hands. Although it cannot display the time accurately to the second, it has a good effect on the overall style of the watch. The diameter of the tourbillon is 10.90 mm, and its position is just in the mouth of the skull. It can be said that the position is very classic. When the watch is working, the tourbillon is spinning fast in the skull's mouth, faintly visible through the gaps of the cage-shaped teeth made of rose gold, giving people not only a mechanical beauty but also an indescribable feeling. It can be said that it is a kind of awe of death, or it is a shock of immortal imagery. In short, let go of your thinking, on this fast-moving tourbillon, your thoughts have no end. This watch also uses a back-through design. The movement of the movement and the operation of the tourbillon can also be seen through the back of the watch. This watch is also known as a fine product in terms of machinery.
The latest and best quality materials in today's watch field are used in conjunction with precious metals to make it surrounded by a luxurious and noble aura when it is born. The detailed processing of each screw and each plane is a manifestation of its high quality. It perfectly combines the unconventional skull design with the tourbillon technology that Richard Mille is famous for. It gives people visual enjoyment and brings us thinking about the ultimate problem of life, which is evocative. endless. Coupled with a movement that has applied many advanced technologies to show the beauty of machinery in front of people, its performance is beyond doubt!